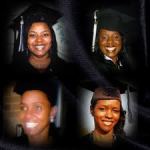 Kenya Hicks, Tashea Stanley-Dixon, Khadija Darr, and Kenji Kuykendall grew up in Waukegan, Illinois, about 40 miles north of Chicago. They have all been close friends since they were 12 years old. All four girls became pregnant while in high school and all four gave birth to sons. All four fathers abandoned the teenagers before they gave birth. All four girls were obliged to go on welfare temporarily so that they could provide for their children. Kenya and Khadija dropped out of high school. One might have bet these four teenagers were doomed to a life of poverty in single-parent homes. If you took that bet, you would have lost.

The four teenagers made a pact to support each other and succeed despite the fact that the odds were against them. Through education and hard work, they were determined to give their children a better life. All four went back to school, worked when they were not in school, and received help and support from friends, family, and each other.

Today all four women are in their 30s. They all have graduated from college. By the end of next year, all four will have MBA degrees.

Kenya Hicks was supported by her parents, grandmother, sister, and friends as she completed an associate’s degree at Robert Morris University and a bachelor’s degree from Columbia College in Missouri. It took her 12 years to complete college. She is currently pursuing an MBA at the Keller Graduate School of Management. She is in the process of starting up a home service agency. Hicks states, “We inspired and supported each other relentlessly to finish college no matter what challenges we faced so we could change the direction of our journey and rewrite our destiny.”

Tashea Stanley-Dixon enrolled in a community college and worked at night calling homeowners who were delinquent in their mortgage payments. It took her eight years but she earned a bachelor’s degree in business administration from Columbia College. She too, is enrolled in the MBA program at the Keller Graduate School of Management. She is now a certified paralegal.

Khadija Darr earned an associate’s degree at Robert Morris University and a bachelor’s degree at Columbia College. Almost 90 percent of her course work was completed online. She is currently enrolled in the MBA program with a concentration in accounting at Concordia University in Chicago. She currently operates her own T-shirt company and has a tax preparation business. She plans to become a certified public accountant.

While working various jobs and taking care of her son, Kenji Kuykendall attended a community college part time over an eight year period and earned her associate’s degree with honors from the College of Lake County. She then went on to complete her bachelor’s degree in 2008 with a specialization in workforce education development from Southern Illinois University. She graduated magna cum laude. Currently Kenji attends Lake Forest Graduate School of Management and will earn a MBA with a specialization in organizational behavior in January. It was a 14-year journey to complete her education. She now is works in human resources for a major pharmaceutical company in Chicago with aspirations of becoming a human resources executive officer. She lives by the motto, “Hard work does pay off.” She could not have achieved her goals without the support of her family and friends.

Excerpt from http://www.jbhe.com/ (The Journal of Blacks in Higher Education)