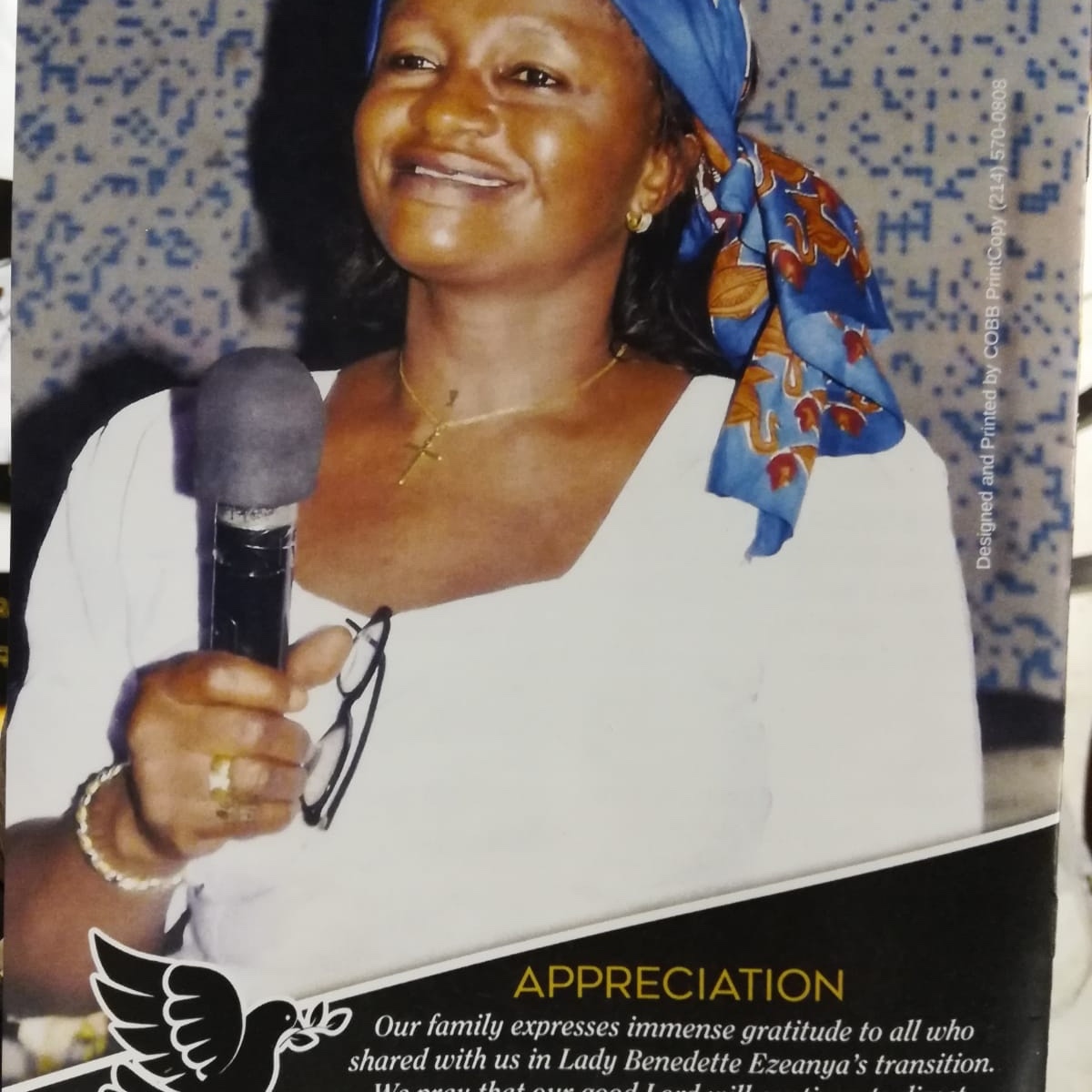 Left behind?! Oh no!

My Mum had kept to her word and actually drove off to Church without us. Lol.

I can’t count the number of times this happened but as we got older, she stopped allowing us delay her and would drive off on Sunday mornings if we weren’t ready, leaving us to find our way to Church.

We grew up seeing our mother participate actively in Church.

Cleaning the Church was something the women did and it was allocated according to groups, my Mum rarely missed hers, except she was maybe under the weather.

She was an active part of the dance group and also sang in the choir for a long while before she finally stopped. She led in different capacities and mentored several younger Christian women.

She solemnly observed all the “no work” days and would make sure that we don’t cook with meat on the days the Church forbade eating of meat, telling us “Uka mabii anu taa”.

Like most Catholic Mothers, she ensured we were up to date on our sacraments and that we regularly attended the block rosary crusades. We never quite got around to attending the early morning masses but that was something she tried not to miss.

The Catholic Church was a big deal to her, she loved the ceremonial way the Mass was performed and actively contributed to Church administration as a lay member and they formed part of her community. After Mass, she would take time to greet her friends, exchanging short stories with some while smiling and waving at others, “ka anyi na nu”, she would say again and again, a kind of parting greeting indicating that she was heading home.

She couldn’t understand why we would leave the Catholic Church for “Uka warehouse” and “Uka Okpulu decking” (an unpopular way of referring to the Pentecostal Churches back in the 90s, when they didn’t have fancy Cathedrals or Church Venues like the Orthodox Churches).

She would lead us in praying the Rosary, something she did religiously, and also in reciting the prayers relevant for the time period. She had some songs that she would sing during such prayers;

And we would sing after her, extolling the goodness of God and declaring that he was known for good things. Another one was like a chant;

Declaring that God did that which was impossible for man to do. I think it’s a song from the adoration ground in our village Uke, run by the popular Holy Ghost Priest; Ebube Muo Nso.

I remember it was during one of such prayer sessions that she found out I wasn’t a Catholic anymore. Her brilliant mind put two and two together when I didn’t say the “Hail Mary” after her or the other Catholic prayers.

I had just come back from University the previous day and she called for prayers that morning. She simply asked me after the prayers if I still attended the Catholic Church and I said “no”, not knowing what to expect. She was really disappointed as I had been a very devout Catholic and she blamed my elder sisters who had left before me.

I remember when she joined the Faith Alive prayer group, a group of women intercessors at the Basilica of the Most Holy Trinity. It was something she was excited about and we would often chorus their greetings; Faith Alive, I’m alive in the Lord! They referred to her as Sis. Bene.

My Mum is a huge reason my siblings and I are committed to the body of Christ, her unwavering devotion, which mirrored that of her father, was an outstanding example we just had to follow.

I remember coming back home on a Sunday morning and seeing her seated in her nightie, I immediately figured something was wrong because she always went to Church. When I asked her how come she didn’t go that morning, she waved aside my question, smiling and saying she would attend evening Mass. I would find out some moments later that her Mum, my grandma had gone to be with the Lord in the early hours of that Sunday morning.

It was a beauty to behold how the Church honored her after she passed. Her burial was beautiful with the array of Priests that celebrated the burial mass. Her beloved nephew, also a Revered Father, was one of them. We all talked about how happy she would have been and I could imagine her smiling and looking on proudly.

She would have been 62 years today; my Mum and today, I choose to reflect on her memories with joy rather than sadness.

Today also being Easter, I remember clearly my Mum’s kitchen activities, not just during the festive period but when she has to do major food preparations. Like most women in her generation, my Mum had a large kitchen, not only in size but in operations, sometimes catering to about 15 people or more on a daily basis.

“A luo m ofu uzo olu”, she would usually exclaim after a hard days work in the kitchen or maybe when she’s done some major clean up in the house.

My Mum paid great attention to the ingredients that went into her food, making sure they were sourced from the best, she paid even greater attention to the cooking process. When she’s in the kitchen, her theatrics could be major, especially on those days she would be cooking three different pots of soup at once; “Uzo ofe ito”. A pot of Egusi soup on one gas burner, a pot of Bitter leaf soup on the other burner and then we would be lined up somewhere slicing Okro for the upcoming Okro soup, my Mum was an “uchu!”; a term referring to someone working really hard at something.

Vegetables were hallowed things in my Mum’s kitchen. We were made to wash the Ugu or Spinach countless times just to make sure that there was not a tiny bit of the tiniest grain logged in somewhere.

“Gbanye mmili, gbanye mmili” she would say with every sense of seriousness instructing you to add enough water to the veggies. “tinye e nnu”; would follow, a reminder that you should add salt. And if she perceived you weren’t washing them hard enough, she would intervene, saying “chee ka m bia”, and take over the washing, shaking the leaves with her two hands in the water with the instructions to observe her “na ene m anya”.

It was clear to us that having sand in the soup was a taboo. I grew up imagining what it would be like to have the dreaded “sand in the soup” experience. Any movement in the kitchen at key points when my Mum cooked her numerous delicacies would probably be met with hushed exclamations of “Aja!”, Sand! as though mentioning it loudly might actually introduce the sand into the soup. If someone was pounding in the mortar and another person walked past; she would caution against sand “Aja! Aja!”

If cut vegetables or other prepared foodstuff queued up for addition to the soup, were placed on the work surface and you probably opened an overhead cupboard; my Mum would go like; “Hey! Aja oooo!!!” Till date, I inwardly duck when I open my overhead kitchen cupboard if there’s cut foodstuff on my work surface with thoughts of “Aja!” on my mind.

Then the process of washing dried fish; you had to first soak them in brine to extract the first layer of dirt/sand, then wash them delicately with a soft sponge to extract the remaining and then rinse them as many times as it would take to get all the sand out.

What do we now say to the washing of offals? The cow intestine also known as afo anu or roundabout, the rough part of the meat which we called “towel anu” but known as shaki in Lagos. Truth is, I rarely eat roundabout meat outside home and I can’t remember the last time I cooked with it either. You see, my Mum would sit down and strip that meat of every interior fat and dirt irrespective of the quantity she cooked, leaving it very clean and that’s the taste I’m used to, sometimes in ordering outside food, that care is not taken because it’s a time consuming process.

It is said that repetition is the law of deep and lasting impression and that’s how my Mum taught us to make some complicated Igbo soups in addition to the observation process. She would chant the steps over and over again so that it would sink in your mind and if you were at a loss on the next step to take, just repeat the chant. For Bitter leaf soup, she would go;

While we loved to cook with Mum in the kitchen (did i really?) It was always great when my Aunties visited because they simply hung out in the kitchen with her and took over whatever it was we were doing in a very casual but firm manner and who are we to say no to such marvelous help?

The passing on of a Mum is something you never really get used to, some of my friends lost their Mother’s recently and I can just imagine the many memories flooding there hearts on a daily. We are grateful for the hope of the resurrection that Easter brings and we look forward to the rapture morning when the dead in Christ will rise up first and we’ll all ascend to meet the Lord. 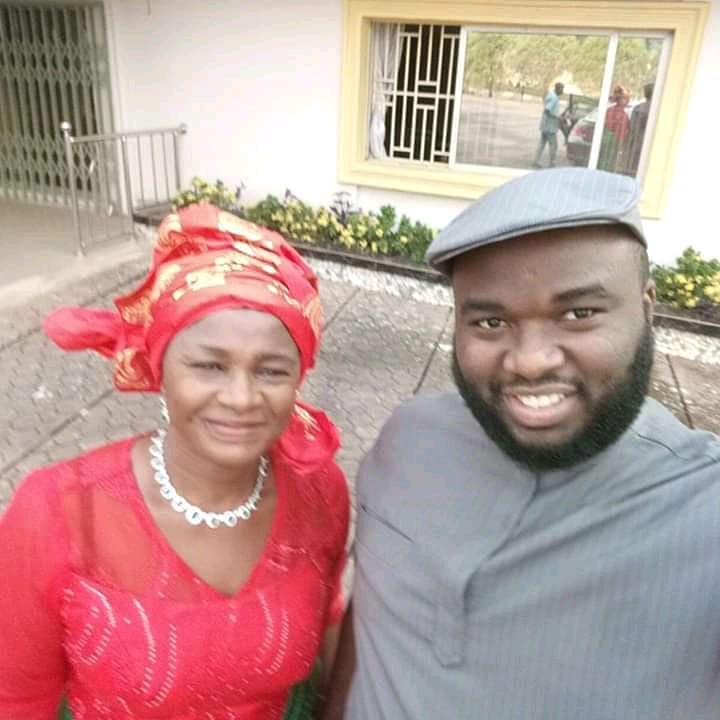 That was how she called us.

It was funny though, sometimes when she wanted to call Obiageli; the last born, she would first of all call like 3 names before actually calling the right one. It was usually a hilarious sight. Her mind must have been filled with thoughts at such times.

Anyways, that’s what you get when you have six daughters so to make it easier, my Mum would just shout ‘Onye no nso?’ Who is close-by and usually the closest person would answer; ooo mu – it is I and then run towards her direction.

But not my sister Uju or our last born Obiageli. Uju would usually shout my name in response if we were together; I guess being 14 months older than I am gave her that right. Lol.

Usually my Mum would end up calling her name instead of mine as she would have given herself away by her voice but sometimes she would just call me; Nne bia bulu efele a o – my dear, come and carry these plates…

As for Oby, she just simply assumed that the call was for any of her elder sisters, especially if she was home with Chioma, her immediate elder. Lol


Sunday, March 22nd marked our first Mother’s day (in Nigeria) sans notre mère. It was also the day the 6 months mourning period officially ended, meaning that all relatives could take off their mourning clothes; the traditional white clothes…

In all, we remain grateful to God for the beautiful times we had with our Mum, for the memories and the stories.