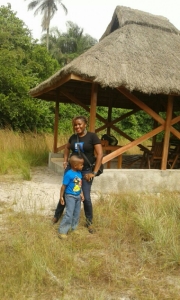 Kwraa, Kwraa, Kwraa… went the sound of the knife as it cut through the Uziza leaves. The pot of Nsala soup went putu, putu, putu as it boiled on the Cooker. I dropped the knife, stirred the soup, dropped a little in the palm of my hand and tasted it for the upteempth time. I felt a bit unsure of the taste.

At that instant, my mind flashed back to one time in the University when I was really uncertain about something. We had travelled all the way from Enugu to Owerri to attend the Zonal Easter Conference of the Nigeria Fellowship of Evangelical Students.

It must have been that evening or maybe the next, the guest speaker (I can’t remember his name but he was huge, fair in complexion with full hair) said that God would be releasing the gift of prophecy to many people in the congregation that night. Silently, I wondered if I’d be amongst them.

We then began to pray and sing to the Lord and then I felt this tightening in my stomach, it was as though I had drank a bowl of cement mixture and on landing in my tummy, it solidified. Next, I felt my body vibrating internally as the power of the HolyGhost moved me. This was a much more gentle vibration, not like when someone is shocked by electric currents or struck by a thunderbolt.

Then, I felt like something was rising from my heart, through my throat and then out of mouth, like I just had to say something. OMG! I thought, what was happening here? I felt really unsure about what I was supposed to say.

Anyway, I heard my voice praying really loud, in a language that was not English, Igbo, French or other languages that I imagined I could speak. I was praying in tongues and then … the words came rolling out in English. I was prophesying… Wow!

I spoke so hesistantly, afraid of saying what the Lord did not say… ‘thus says the Lord’… I really can’t recall the other things I said. After that awesome experience, I would go on to prophesy during prayer meetings but I was usually unsure of myself when I started out.

As I grew in faith and in the understanding of God’s word, I became more certain that I would say the right things based on God’s Word and the inspiration of the Holy Spirit, so I spoke with so much ease and it just kept getting better.

I stirred the soup again, dropped a little in my hand and licked it up. The taste of the Uziza leaves did make a difference afterall. I was still a bit unsure though as I served it and I simply told my hubby ‘this is the worst Nsala soup I’ve made in a while.’

What a huge relief it was when he ate it and said it tasted really nice (hubby can cook and he doesn’t pay pretend compliments).

Listening to my son lately, I see how much he’s so grown and today he hits the big 3 without the 0! LOL.

I remember recently in Church, he was sitting besides me and then started showing me his gentleman tendencies.

First he reached up and touched my hair:

Son: Mummy, your hair is beautiful.

Wow! Was I touched? I smiled and thanked him. I had a unique hairstyle on and people had been complimenting me.

Then he reached for my face

Son: Mummy, your lips are beautiful

I was practically blushing as I said thank you. I was wearing red lipstick. He then pointed to my eyebrows:

Wow! My every morning struggle of getting the perfect curve on my brows. Lol.

Then he pointed to his Dad and said

Oh my God! I couldn’t hold back the laughter even as I told my hubby later on.

Actually, my son thinks big is a compliment and loves to show of his big tummy! So we do have to condone some shirtless days at home. Lol.

Happy birthday to my adorable 3 year old, the hand of God is upon your life and you are blessed and highly favoured. We love you!

PS: The days of ‘that toy is for 3 years and above’ are over. Now I have to find other excuses. Lol.

A colleague sent me the story below and I couldn’t stop praying! It would bring tears to your eyes. Enjoy!

Dear Pastor and brethren,
I want to thank God for the opportunity of being present to give this testimony to the glory of God Almighty.
On the 10th of June, in the morning while driving on my way to my construction sites where I presently handle various building projects ads an Architect, I suddenly felt the urge to pray, but not really knowing where to direct my prayers to. Hence I started praying in tongues over each of my projects and workers against any mishap or evil. I prayed for several minutes focusing my mind on the sites and all to be done that day till I felt a knot loosen in my spirit, however after driving a few more minutes, I felt another heavy burden in my spirit which needed my attention. I later directed my prayers again to my projects but heard the holy spirit telling me to just speak mysteries to the day not knowing what I was praying about, this I did for several minutes again until I felt a victory note in my spirit.
After this the day went smoothly until it was evening and I had to go pick my wife and baby from school and work respectively. I had driven all the way from a site at Magboro till I was almost at Berger, exactly on Kara bridge when suddenly a jeep moving with very high speed from the fast lane crossed over to the slow lane where I was and hit my car from back left with so much force that it threw my car off the road till it landed on the bridge edge so that my half of my car was left dangling over the watery depths below and the other legs were off the ground on the other side.
The car was squashed and it was a miracle that I escaped completely and got out without a scratch.
Later a crowd gathered looking down the bridge for a passenger they claimed they saw jump out of the passenger’s side down the high bridge unto the grounds below. According to eye witness we were two in the car and they saw someone jump out the car through the other window. I kept on telling them I was the only one in it but the people around who claimed to see the other person were overwhelming. It was said that the person landed, stood up and walked away into the crowd. This was also confirmed at the police station by the policemen under the bridge which I denied any knowledge of, but no official report could be made because the person who they claimed walked into the crowd looking fit after falling from such a height could not be found or identified by anyone till date.
Till yesterday I was still confused about it until I had a dream last night that an angel had physically held my car in position preventing it from falling off the bridge after which he jumped below and went away. I immediately woke up to write this testimony and give thanks to God for this great deliverance which still baffles me as I honestly still can’t explain it. Our God still works wonders especially in this month of prayer. Thank you mighty Holy spirit my ever present helper.
Yours faithfully
Bro. Biyi Kushimo
Christ Embassy Zone 5.

Wow! It pays to serve Jesus.

My entire life I have lived for him.

From a tender age, I said ‘Yes’

Even when it was unpopular

Even when it seemed awkward

Even when it was uncomfortable…

Truly, God has been taking care of me,

He has made my life sooooo beautiful

He has blessed me with every spiritual and physical blessing

He has placed my feet on the Solid Rock.

I just want to say ‘Thank you Lord’

For being there for me always

For honouring my faith and my trust in you.

Thank you my dear Lord.

If today, you are still undecided

Or you keep slipping in and out,

Now is the time to surrender,

Give it all to Jesus.

Trust in the Lord with all your heart

And lean not on your own understanding

He makes all things beautiful in His time.